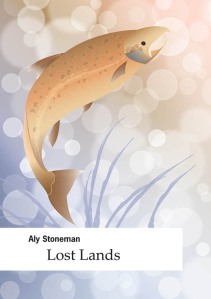 In 2011 Crystal Clear Creators received funding from Arts Council England and support from Writing East Midlands to provide professional mentoring to six up-and-coming writers, and to publish six pamphlets of their work in Spring 2012. The writers  who were selected (from a regional competition that attracted over 100 entries) were Aly Stoneman, Andrew ‘Mulletproof’ Graves, Charles Lauder, Roy Marshall, Jess Mayhew, and Hannah Stevens. Aly Stoneman was mentored by landscape poet Mark Goodwin (Winner of the 2010 East Midlands Book Award) who has described her resulting pamphlet Lost Lands as ” … a tight river of poems with a dangerous, irresistible current”. The pamphlet was illustrated by Steve Larder, with the layout and cover designed and created by Helen Walsh, Lonely Cottage Productions.

Aly Stoneman writes at the start of her poem ‘Mermaids’: I walked a blank white 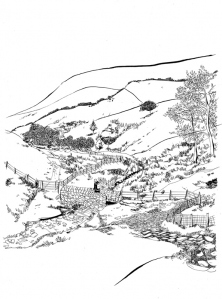 page/between scarred headland/and storm line…’ and this is how her poems proceed – revealing a poet’s walking to face existence and its ‘harsh snatch of song.’  There is a smooth musical grace to Stoneman’s verses, easeful as the flow of water; yet like water her images cut through ground, into landscapes both ‘human’ and ‘wild’. Lost Lands is a tight river of poems with a dangerous, irresistible current; an odyssey where the reader encounters wild birds and animals, beings from Greek and Celtic mythology, a host of rivers singing, and subconscious woods. Mark Goodwin.